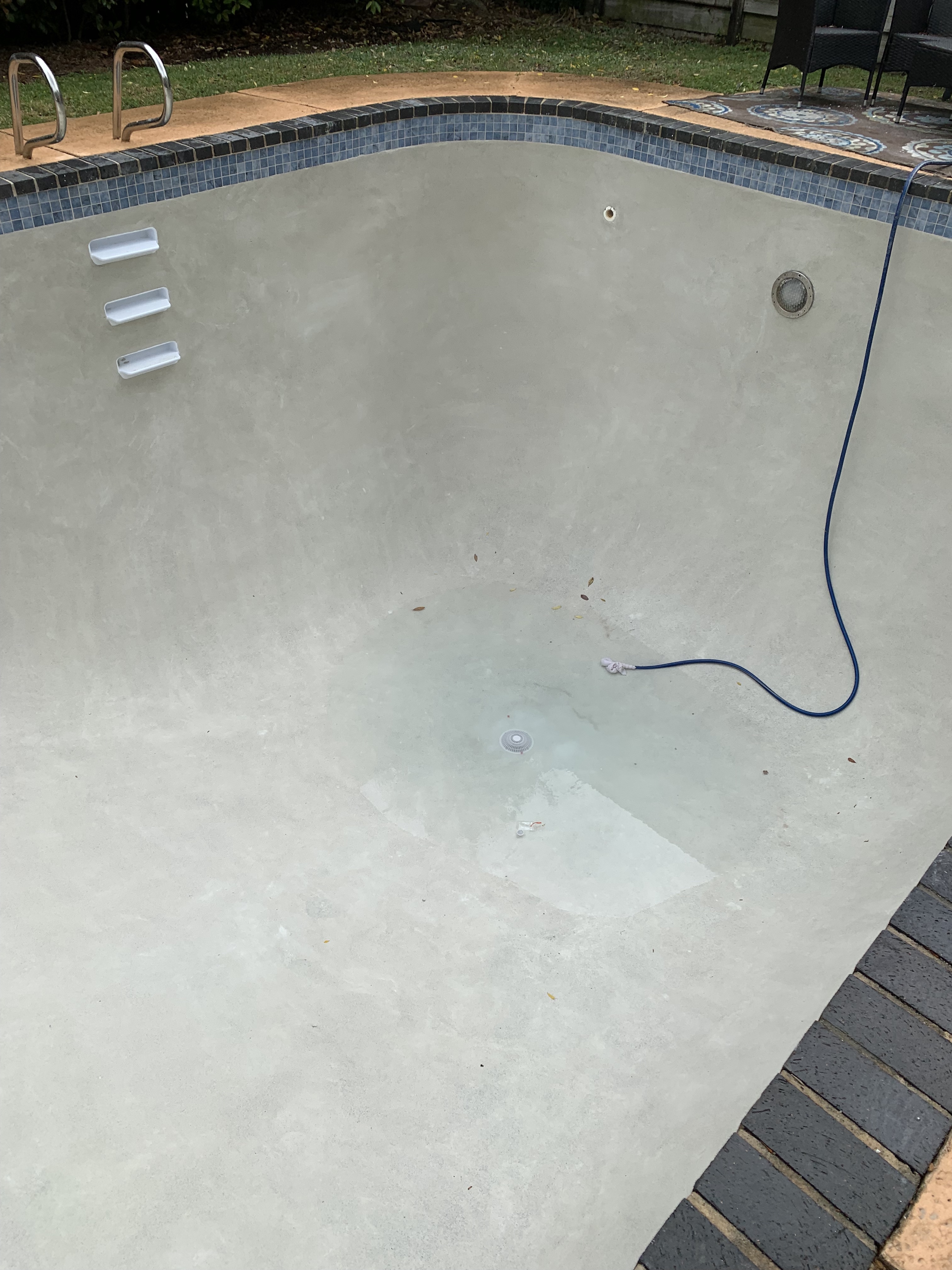 In the 1970's when this pool was built, diving boards and deep ends were the norm, and they held a ton of water!  Nowdays pools are not generally made so deep, but to fill it in would have required dirt hauls and rebar and a lot more time and expense, so I just decided it would be cheaper and easier to pay the one-time water bill.  It took about 5 days for the pool to fill completely.  The weather was very windy during that time, and we are in peak pollen season in south Texas, so the pool collected as much yellow dust as it did water!

Any inconsistent movement of water across the plaster could cause stains, so the hose was carefully placed over the drain cap at the bottom end, and covered with a rag to disperse the water as it flowed. Once it began to fill those hose floated up, so the water rose evenly without washing across one area. I was told that stopping the fill could cause a ring around the pool if the water sat without rising for too long, so I just endured a few days of low water pressure and let it flow. 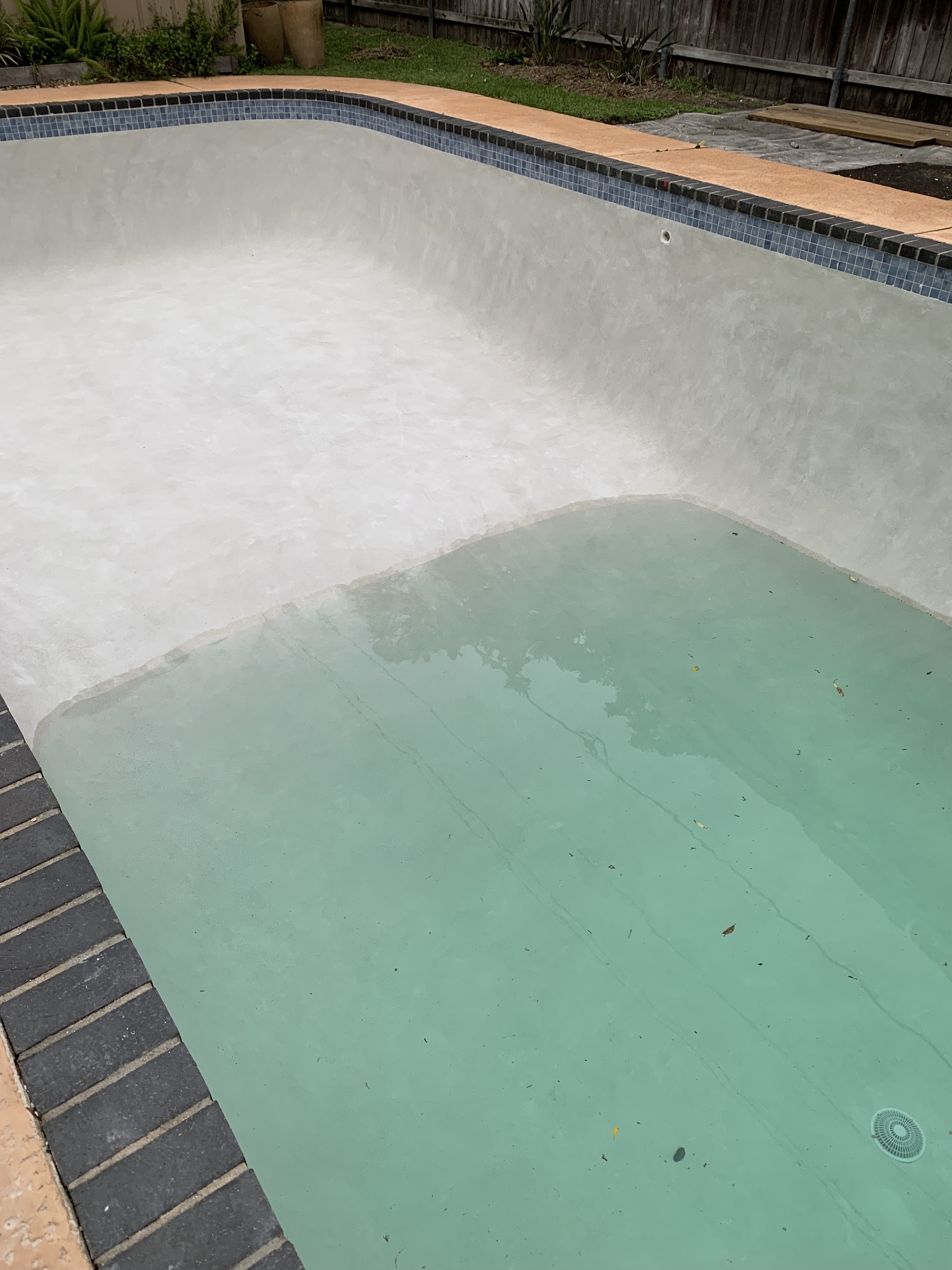 It took a couple of days for the deep end to fill, and several more for the shallow end to fill. 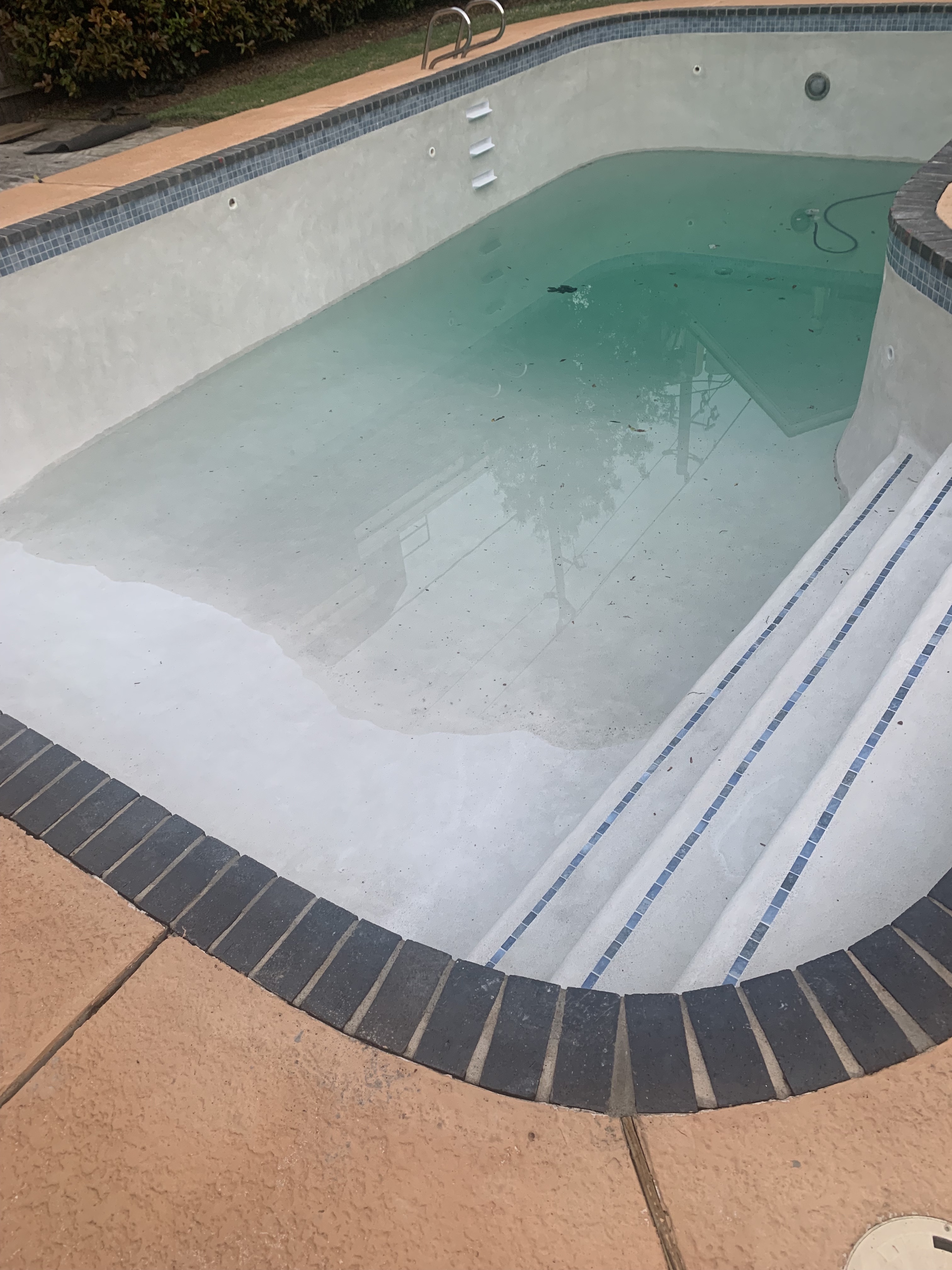 I'm not an expert on hydrodynamics, but I know enough about water and physics to realize that once the deep half of the pool was full, the rate of rise in water level would essentially be cut i n half, because the surface area was doubled.  Those last three day the water crept up slowly and steadily, and finally, on Good Friday, it rose to reach the appropriate level.  (I'm pretty sure there an allegory in there somewhere!). 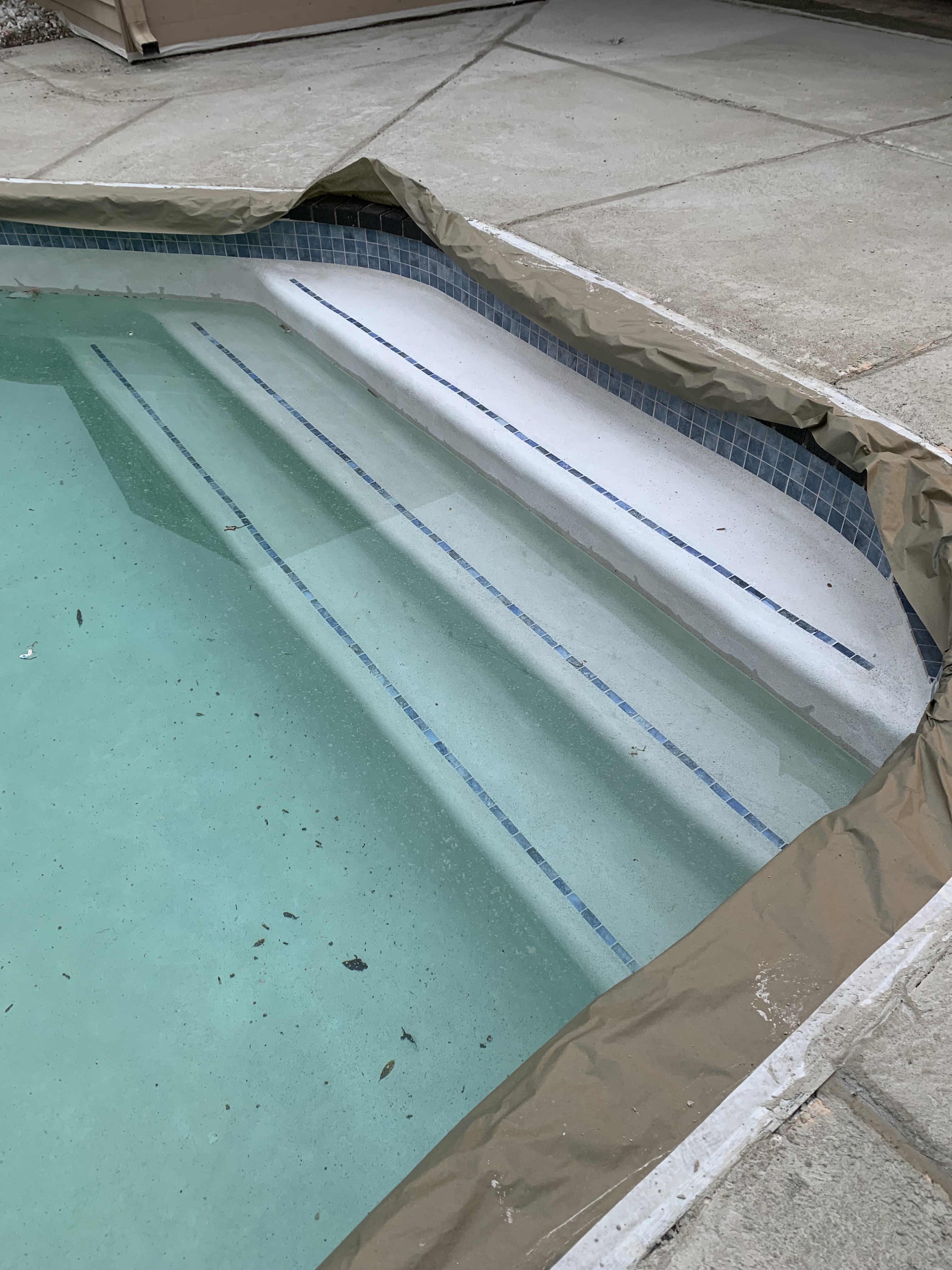 I watched it rise, step by step, until the top step was covered, and the waterline was centered in the opening for the skimmer. 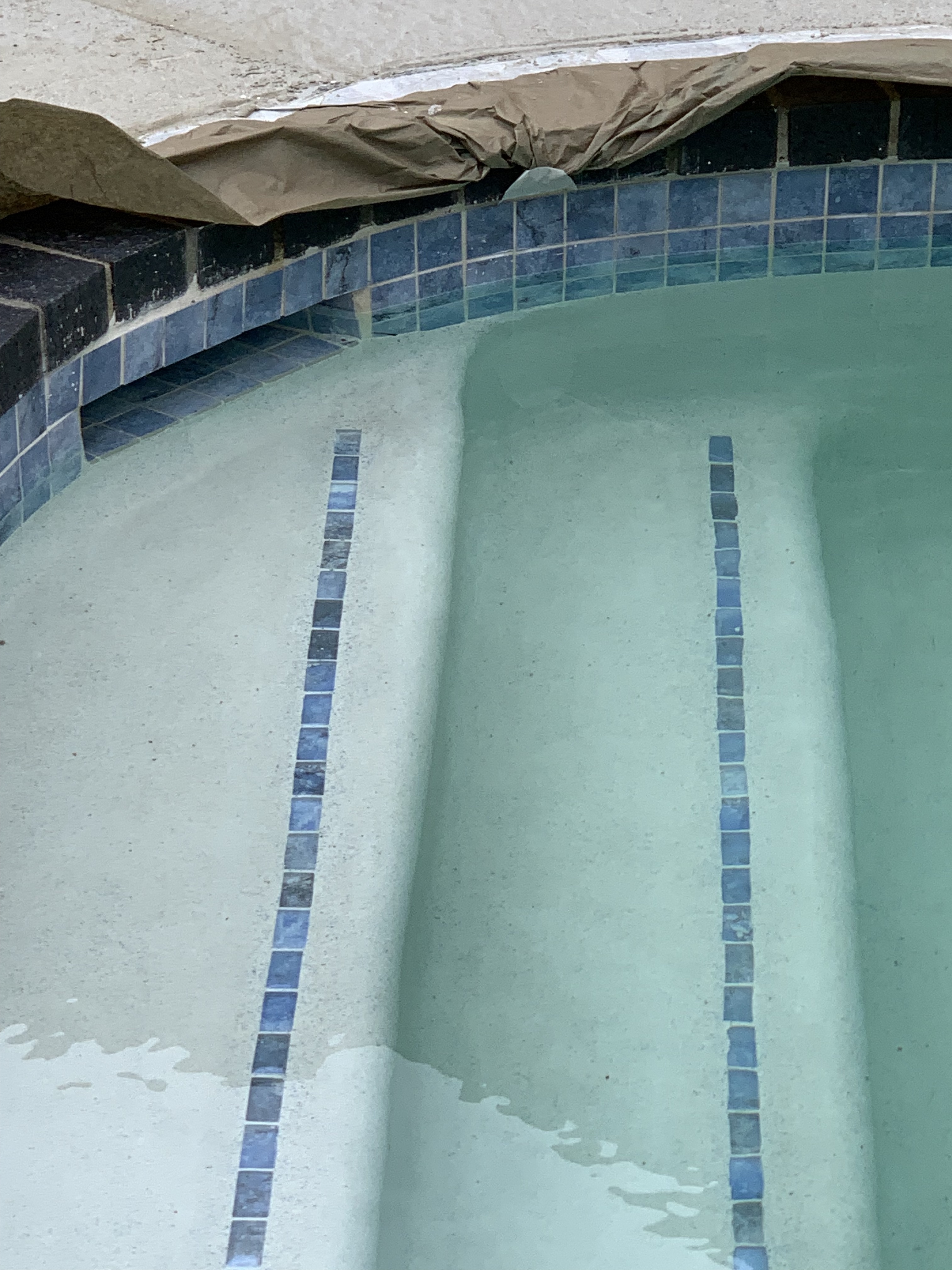 At that level, the pumps and filters can be started and the start-up begins.  The first 3 days are critical for the curing plaster, so A Plus Pool Services includes a 3-day start up package with their renovations.  Marc and Melissa sent their boys Nick and Aaron (it's truly a family business) to do the start up, which began with starting the pumps, backwashing the filter, and brushing down the plaster, as well as checking the water chemistry and beginning to balance it.  They repeated the process for the next 2 days, and on that third day, they broke down the filter to clean and reload it, added chlorine for the first time, and turned it over to me to maintain.  When the pool first filled, the water appeared a bit cloudy, and more teal than blue, which initially worried me because the plaster was supposed to be blue to match the tile.  But, after the chlorine and filters ran for 24 hours, the water turned a clear, sparkling blue that matches the tile perfectly!

We're still not finished!  For the past few days, crews have been working on the decks when the weather allows-  once that's finished I'll post about that process.