The last several days have been a whirlwind of work, but the new pool decks are finally finished and they look amazing!  The deck project took longer than the pool, but that's partially because it was only a two-man crew, vs. the army of guys that plastered the pool.   Let's start with a look at the old decks: 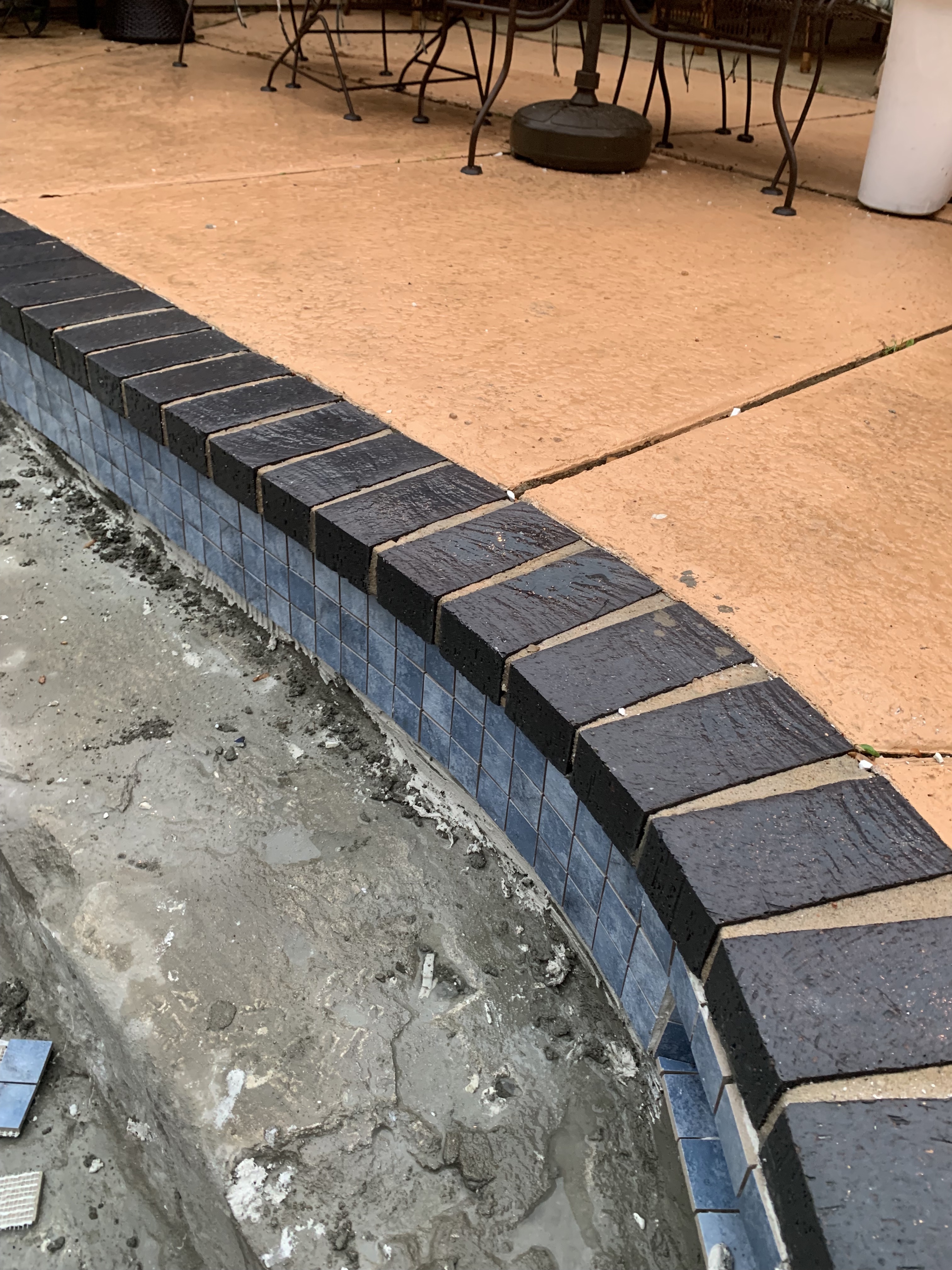 Here's a photo of the old decks while the pool was still drained... this is actually the 2nd deck surface this pool has had.  In the 70's, this pool would have been built with concrete-aggregate decking, which was the gold standard at the time.  Made with pebbles set into concrete, it was supposed to be natural looking and slip-proof.  In fact, it was ugly, scalding hot, and super rough on tender bare feet!  When it was poured, it had large wood-spaced expansion joints to keep it from cracking and buckling during cycles of hot and cold weather. The wood had long since rotted away, leave 1" gap in the pavement that were constantly filled with dirt, seeds, and weeds.

Sometime later, probably when the house was flipped. someone made a half-assed attempt to modernize the deck.  They used a layer of some sort of mortar/concrete mix to disguise the rocky texture somewhat, giving it a pocked up service that help dirt and mildew with a death grip! On top of that surface, they sprayed an orangey-ugly coating that matched nothing in the yard and never looked clean.

No amount of power washing could get it clean enough to suit me, and I was constantly spraying the weeds to keep them at bay.  And I'm VERY happy to see that orange color go-  who picked that, anyway?! 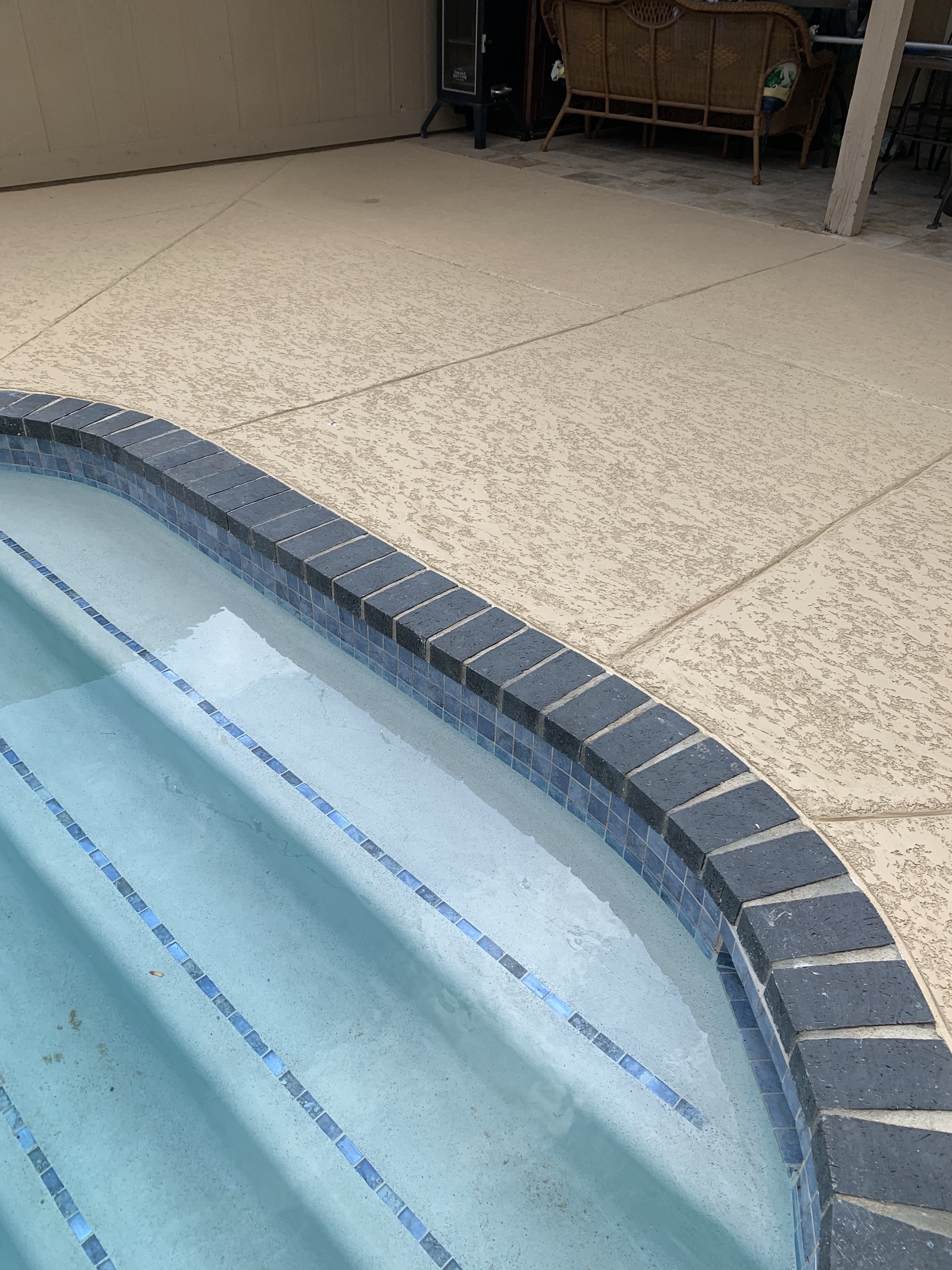 Here's the color I picked... it's called "Farro" which I think is some sort of grain.  It's perfect because it's slightly lighter than the paint on the house, and picks up the color in the tile on the back porch.  The texture is much smoother, more even, and more subtle- kind of like the "orange peel" texture builders are using on walls these days.  And the part that took the longest:  all the gaps are sealed. That was the process that took the longest, as the deck material was hand-troweled over the edge of each slab, in effect extending it to narrow the gap somewhat.  Once that was all done, the rest of the gap was closed with a special mastic to seal it, and then the concrete stain was sprayed over the entire surface.  There is still a slight channel to drain water off of the surface, but it is shallow and will be easy to clean with a hose nozzle.

I'm going to give it a good 24 hours to dry and cure before I put any of furniture back on it.  I expect a couple of trips to At Home in my weekend-  and the countdown to Memorial Day begins! 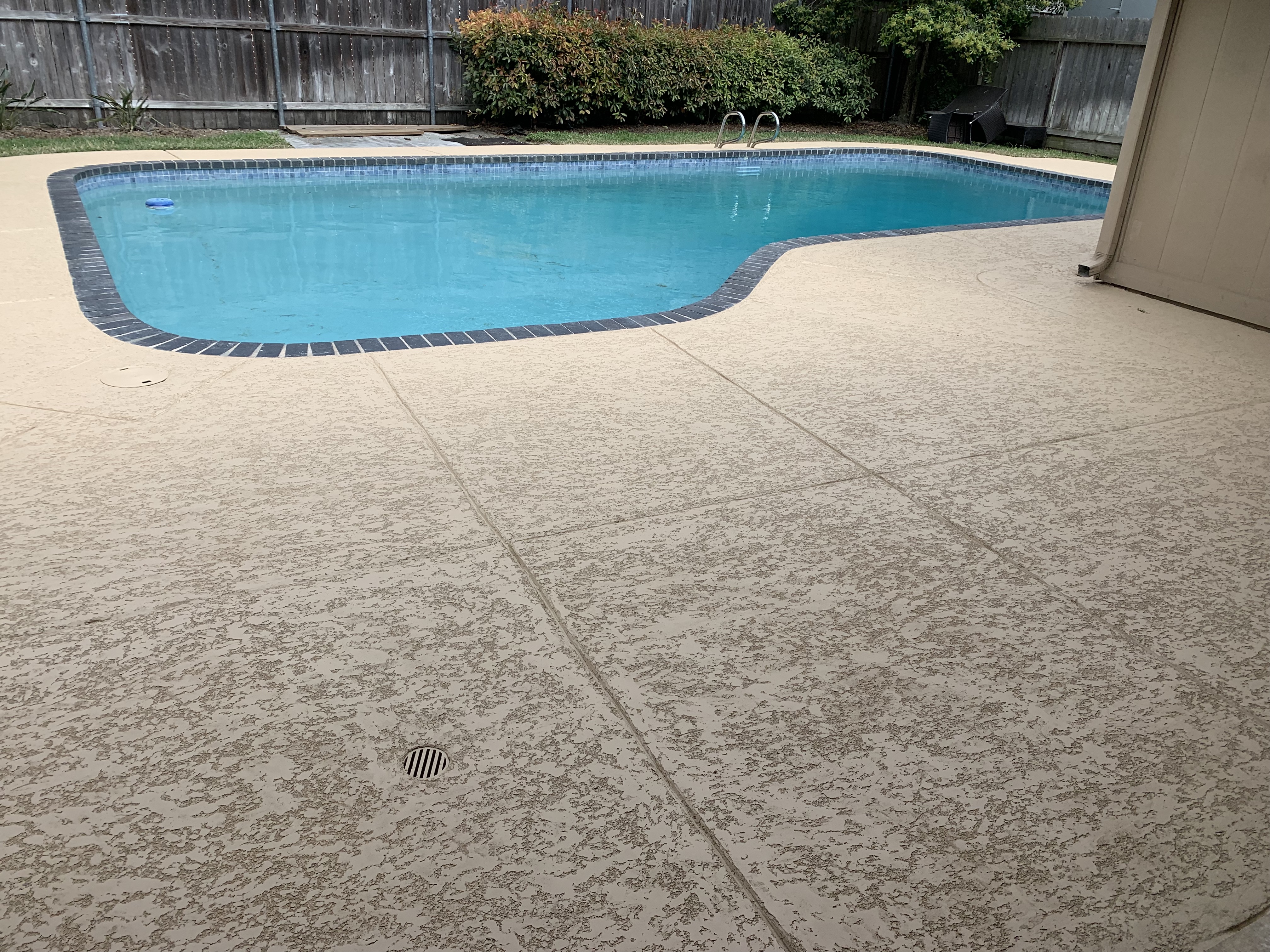